Vocational training teams are groups of professionals who travel abroad either to teach local professionals about a particular field or to learn more about their own.

This VTT sprang from the Maternal and Child Health Rotary Action Group of which our member Past Rotary International Director (PRID) Ken Collins is a member.

Learning of the high mortality rate of mothers and babies due to childbirth, he first of all obtained a Rotary Foundation District Grant of $3,100, which was matched by our Club, to undertake a planning trip. Travelling to Raipur in September 2016 was PRID Dr Ken Collins, Rotarian Dr Barry Mendelawitz (Gynaecologist) and Carol Pinch (Midwife). Problems were identified and plans put in place for the full team to return on 11th February 2017.

A Rotary Foundation Global Grant for US$30,000 was obtained for the full team to undertake two training trips to Raipur to train the midwives in villages in an effort to reduce the currently high mortality rate of mothers and babies. The first was in February 2017 and the second took place twelve months later, in early 2018.

The Group Study Exchange (GSE) program – which has now been discontinued – provided grants for teams of men and women aged 25-40 in the early stages of their business and professional careers to travel abroad and share vocational information with the representatives of their respective professions in another country.

Another important area of this exchange was the cultural aspect, which team members shared with the Rotarians in the District they visited.

An exchange took place between two districts in different countries, offering each district the opportunity to both send out a team and host the inbound team from the paired district for that year, advancing the program’s ultimate goal of promoting international understanding and goodwill.

Team members, led by an experienced Rotarian, spent 4 weeks studying the host country’s institutions, economy, and culture, while observing how their own professions are practiced abroad.

GSE Teams our club was involved with 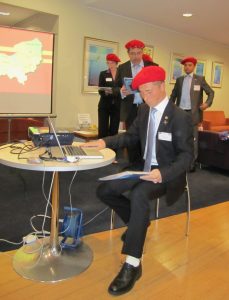 We nominated four team members and one team leader, of which two team members were successful. Those exchanges were to:

A special Uni-focus Group Study Exchange was organised by PRID Ken Collins for a team of 9 Aboriginals, plus a Rotarian Team Leader, to travel from Wiluna to Fiji, District 9920, to learn more about village life to assist them with community at home in Wiluna. This took place in 2010-11 and was funded from District 9450 District Designated Funds.