Rotary International took on the challenge of the eradication of polio back in 1979, when then RI President Sir Clem Renouf found that polio is the only immunisable disease which could be eradicated.

In 2016 there were 35 cases in 3 countries: Afghanistan, Pakistan and Nigeria. 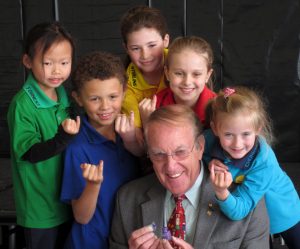 Volunteers working in India to immunise children against polio paint each child’s finger nail with purple paint. When the health workers return the next day to check all children have been immunised, the mothers are asked to show them their children’s purple finger nails.

From 2010 to 2014 we encouraged Primary Schools to hold a “Paint Your Pinkie” day during which the children learn about the importance of immunisation and the eradication of polio. They donate a gold coin to assist in the eradication of polio and have their little finger nail painted pink or purple. Every dollar donated will immunise two children.

Thanks to the efforts of the Canning Vale, Churchlands, Claremont, Dalkeith, Moerlina, Mosman Park, Noranda, North Cottesloe, Quintilian, and Swanbourne Primary Schools, some of which held multiple Paint Your Pinkie days, $6,857 was raised to help End Polio Now.

We participated in Climb for a Smile, raising $900 for the End Polio Now project.

Funds have been raised on a couple of occasions from contributions from staff at the City of Nedlands.

Money boxes which members have in their homes or business to collect loose change have also brought in valuable funds, and a number of members have made personal contributions.